IN HIGH SCHOOL, as many other young adolescent teens are during this time, I began to feel an emotional admiration for classmates and friends of both genders—males and females alike. My freshman year, I met a boy whom I only once briefly met in the 7th grade during a small group therapy counseling session with our guidance counselor. You can imagine the look on his face as I glanced over at him for the very first time—small beady eyes, a warm, gentle grin and sunny disposition. I was somehow entranced, but dared not say anything except for a simple “Hi” and a gentle wave of the hand. When we finally briefly re-connected in high school, I nearly fell in love with him—or so I naively thought. Fast forward ahead many years into the near future. After many long hiatuses of not communicating back and forth online ever since Tim and his mom moved out to Texas in February 2008, one May evening one year ago, I decided to muster up the strength to tell him the truth about how I really felt about him all this time, and how much I’ve missed him so. “Tim, I love you. I really do.”

In those few short minutes of instant Google Talk messaging, I never would have anticipated my honest confession to go so awry: “EWWWW! GO AWAY HOMO!” I remember was his initial one-liner, followed by many continuous months of phone calls and Facebook correspondences that would usually start with him flaunting, “Hey there fag. How you doing today?” as Tim would horrendously giggle in an uproar over proudly using the word FAGGOT every time to denote who he perceived I was: a lonely, crippled faggot. And through the insults and accusations, I still tried to show him genuine Christian concern for his situation, until he scared me and scarred me so deeply, I wouldn’t even think he’d get on my last nerves. But he did, and I had to boot him out many times, until I felt sympathy and tried to let him back in—and repeat this vicious cycle all over again.

It has been several months since we both left again on hostile terms, and my romantic feelings for him have rapidly faded with time, even though there will always be a part of my heart that aches for his. Growing up in a conservative Evangelical household, I learned from a rather young age not to mingle with practicing homosexuals, and that harboring romantic feelings for another male is “an abomination”, as quoted in Leviticus. But during the latter half of last year and the first half of this year, my family would catch me pursuing a blind interest in wishing to be with other young men, and would caution me on the dangers of pornography and HIV. And while I boldly acknowledged the dangerous waters I would be trekking into, I couldn’t get Tim and many other guys whom I’d dream of being with out of my head, even as I fell asleep in bed at night.

For you see, I too went through repetitive cycles of trying to combat both my homosexual and bisexual lusts for other people, until at some point, I was, and still am, now realizing that God doesn’t judge us based on our sexual orientations or our disabilities alone. It’s the people who do:

Our sadistically twisted news media thrives on stories of sorrow, depression and suicide—and largely encompasses people of all backgrounds, nationalities, genders, disabilities and age groups, so much to the point where it seems the modern American psyche is only built around these very constructs. And one of the largest among adolescents and young adults of my current generation lies with LGBTQ youth, who are not only pressured to conform to the norms of a heteronormative society, but in some ways also resent the narrow-minded perspective of looking at the entire spectrum of sexuality as solely gay or straight.

Coincidentally, in a recent Gay-Straight Alliance meeting I attended this Thursday at my community college, most participants in the group reiterated similar feelings I myself have also had when it came to adopting an orientation that loved both males and females, instead of neglecting one entirely and falling madly in love with on the other. Moreover, despite all the stereotypes many of us have heard surrounding the possibility that one CAN actually be comfortable becoming openly bisexual—that bi people are extra promiscuous and can’t actually stay committed in healthy monogamous relationships.[1] While there may be some truth to those kinds of preconceptions, I sincerely and wholeheartedly appreciate what one of my recently open lesbian classmates Katey Snider has exclusively noted in friendly conversation with me earlier this week:

Being bi didn’t change you. Just your preferences.

I personally would like to amend the tense she uses in her statement here, so that it sounds current. Being bi DOESN’T change you. It just dictates your preferences. 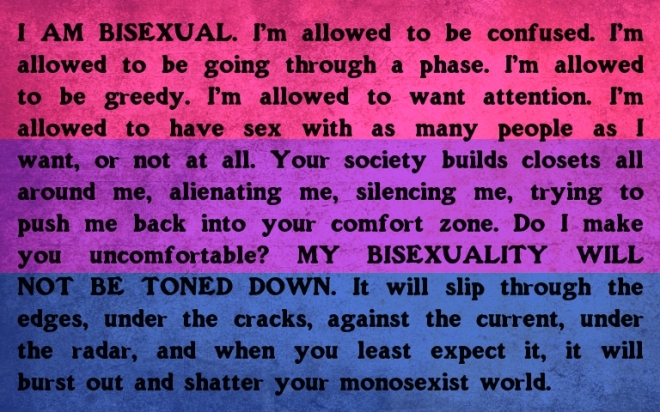 In the words of another fellow classmate I’ve known as far back as elementary school:

Put it this way; most straight guys would probably never go out with a guy, but they can appreciate a good looking guy when they see one. Most of my girl friends that are straight say the same thing: they would never go out with a girl, and they aren’t attracted to other girls, but they can appreciate a good looking girl when they see one. And most people, if not all, have some degree of bi-curiosity. Like, take me for example. Am I attracted to women? Yes. Am I attracted to men? Not really. But can I appreciate a good looking man when I see one? Yes. Have I ever been curious what it would be like to be with a man? Yes. Would I actually do it? Doubt it. But either way, I doubt most people that claim they’re perfectly straight or perfectly gay are telling the truth. Somewhere, sometime, they’ve probably been curious at least once or twice in their lives.

~ Words of profound wisdom from my good friend, Albert Tsai

My personal journey towards coming out as bi these days, I will be extremely clear, is NOT one of exclusion anymore, as I once profoundly believed, following in the narrow-minded teachings of fellow churchgoers and ministers alike. In fact, I now find it humorously ironic when many close friends of mine who are also devout Christians use the Conversion of Saul story in the Book of Acts[2] to demonstrate that God can even humble a man as him, and blind him (literally) in order for Saul to gain a fresh perspective from the opposing side he once so fiercely targeted.

In a rather sad but grateful way, I actually want to thank my now ex-friend for one lesson I’ve gained from all the bullying he only carried out on me a year ago. Until he is able to differentiate what is truly righteous and what is not, he will forever remain living in Saul’s former state of mind prior to his conversion, while I am boldly taking steps towards imitating Saul after his conversion to Christ.

I know what you’re thinking: it’s scary to be honest. It’s scary to be open. In fact, sometimes the person on the other side WILL reject us; they WILL hurt us. Or they’ll make us wanna crawl back into our isolated cave, but JOY is at stake, and it only happens when we LET THE GUARD DOWN.

~ Jefferson Bethke, an excerpt from What Does It Mean to Be Truly Human? (2013)

In the case of T. and I, this is all too apparent. But with time, I have indeed come to acknowledge that his burdens are not really mine to bear in the first place, and that, although he has hurt me very deeply, somehow, I can still find a place in my heart to forgive him, as painful and as fresh the memories may be. This is only because I am reminded time after time that we are all sinners humbled before the presence of a Holy and Righteous God, and that He forgives and loves those who come to Him in every state of mind and heart.

Christianity has it wrong. We are not broken. We are not fallen. We are not flawed. We are simply fragile. We are beautifully distractible. We are self-invested because of love but that love also gives us a slight bias toward justice. We are so deeply invested in life that we can, at times, deny the larger good for the experience of the moment. We are not broken. We are human. We are flesh and blood, and we are experiential. Sometimes that makes us better. Sometimes that make us worse. It never makes us less. Or sinful. Or unredeemable. It means we are real. It means that life has a relentless hold on us. The struggles, the stumbles, the seemingly endless short-fallings simply point to our humanity not to our unworthiness. They mean life is difficult — but they also mean life is vibrant – pulsing with potential, ripe with possibility, constantly presenting lesson from which to grow. YOU – you are not broken. You are a unique expression of God here on Earth. You are bursting with potential that has not yet been expressed. You are God’s beloved. You are NOT broken. You are in process. You are love hoping to not only be expressed but to be recognized.[3]

Therefore, I now stand for INCLUSION, and using God as the go-to guy to support a passive-aggressive stance on the LGBTQ community, as I once did as well, is the real abomination around here. And I now mean that in every way intended possible. And a final message to my LGBTQ peeps who may still be afraid to fully come out of the closet. I encourage you to take your time, pray and believe fervently, and always remember: you are not alone. I will be here, waiting to accept you as the valuable man or woman you already are, with arms wide open. ❤

The Song That Inspired This Column:

What “Coming Out” Really Means, and Why It’s Crucial:

An independent columnist carrying on a "What It Takes" legacy...and proud of it too! :D View all posts by jchenthecolumnist

5 thoughts on “Aiming for Inclusion: Loving Others as an Openly Bi Christian”